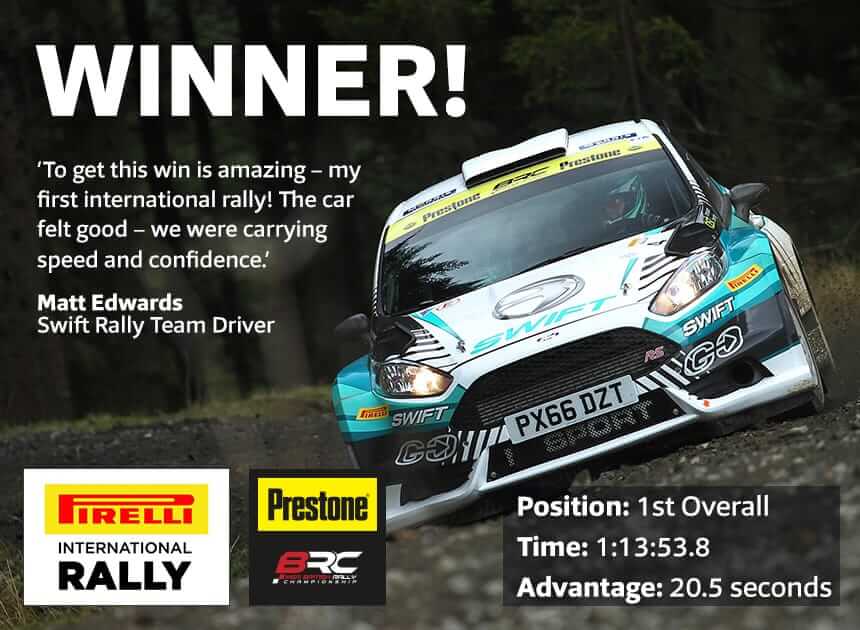 Behind the wheel of the Swift Go car, driver Matt Edwards won the Pirelli International Rally – his first international rally win and a statement that shows he means serious business in 2018.

Matt and co-driver Darren Garrod finished the event 20.5 seconds ahead of Rhys Yates in second place. The super-high performance M-Sport Fiesta R5 sped through the fast and furious 80-miles course in the legendary Kielder Forest.

"This win means everything," says Matt of the Pirelli result. "It's the first time I have won a rally with international status.

"I grew up watching my heroes win international rallies – people who went on to become world champions in the WRC."

Despite this talk of fairy-tales, Edwards is already seen as one of the brightest talents in British rallying, and hopes were high going into the Pirelli.

"We said top 3 would be a perfect start;" Matt told the BRC. "To actually come away with a win, with that sort of control, was great."

For Matt to start the new 2018 season by beating Keith is the cherry on the cake.

"Keith is one the sport's biggest icons," says Matt. "He's won the British championship 4 times, and in 4 different cars. To beat Keith at the Pirelli is a significant achievement. If you can topple him, then you're on your way."

The car 'was perfect'

There are cars, and then there are M-Sport works-prepared rally cars. Our Fiesta R5 is an absolute beast – fast, fluid and incredibly good fun. And on race day, it did everything Matt asked of it.

"The car was perfect," says Matt. "It allowed me to focus on the driving. If that’s all you're worried about, you can do that that little bit better."

The next event in the British Rally Championship 2018 is the Renties Ypres Rally in Belgium. Can Matt continue his winning form?