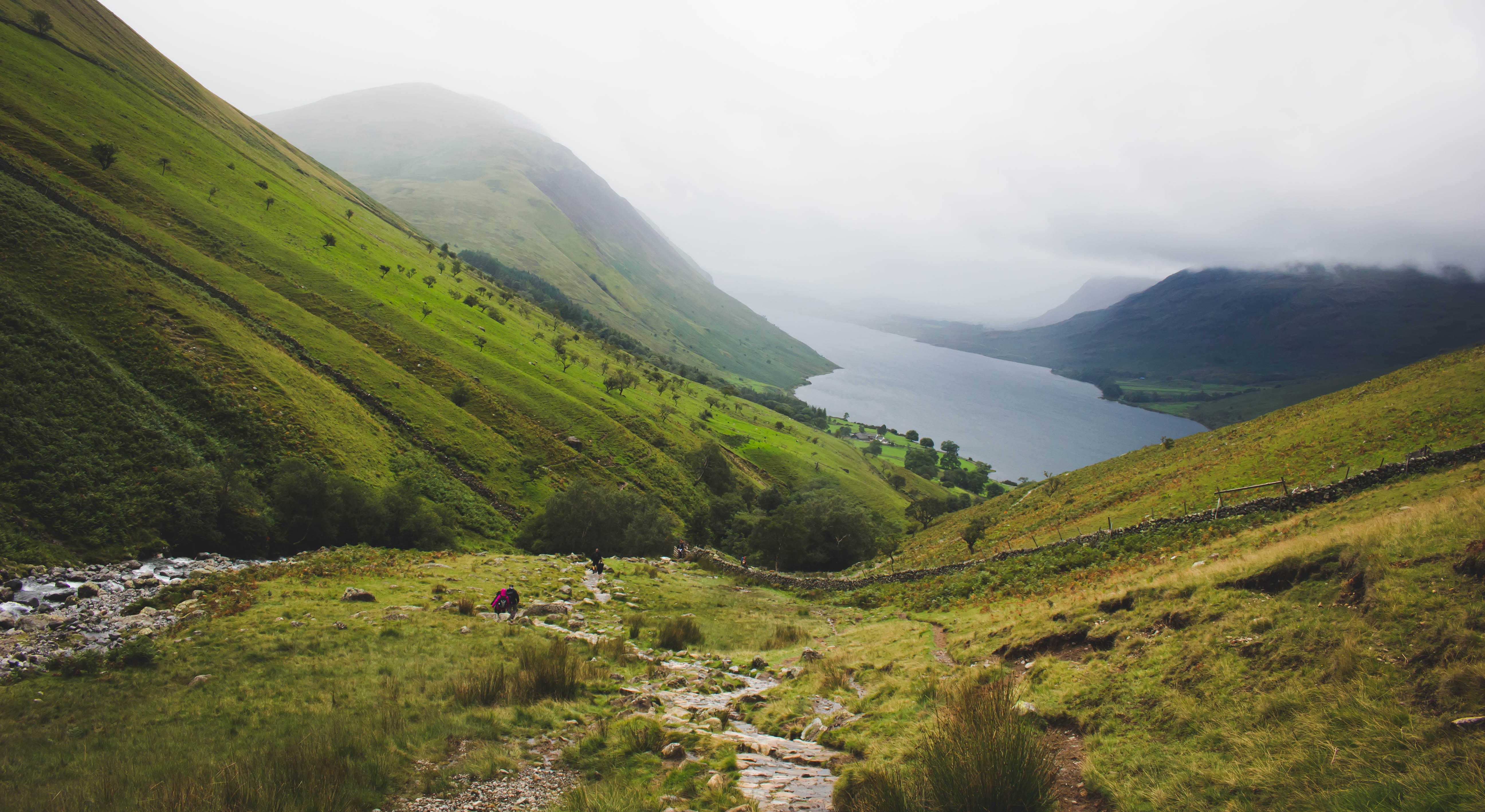 A fell is a word used to describe mountains and high moorlands in the Lake District. Fell running simply involves running and navigating your way across these remote terrains. We’ve found a range of locations in the Lake District for you to have a socially distanced run on your motorhome holiday.

Where does fell running come from?

The sport originated from countryside farming villages and towns in the Lake District and Peak District. Contestants in the race would run to the top of a nearby peak before returning back down the slopes. Typically, local shepherds would win the race as they were used to the craggy landscape and were able to navigate the hills with ease.

Such traditions have since been continued, either as a leisure activity or as part of an organised race. Fell running allows you to explore rugged and wild natural territories, taking in breath-taking views as you reach new heights. Don’t be fooled by this freedom however, fell running is a dangerous sport and the right precautions must be taken.

How can beginners stay safe?

Fell running takes place in rural, isolated areas with uneven ground and particularly difficult environments. In 2018, the The Lake District Search and Mountain Rescue Association responded to 656 incidents, and unfortunately 18 of these resulted in a fatality. This is an important reminder to fully prepare for running in these remote areas.

Firstly, as a beginner, it's important to train correctly and ask others for their advice. Local running groups or the Fell Runners Association can be a good place to start to get the help and guidance you need.

Go off road and learn to assess the different terrains, thinking carefully about where to place your feet. It can also help to learn how to read a map – up in the fells, access to the internet can be near impossible so you cannot rely on your phone.

It's also critical to wear the right clothing and footwear. You should wear supportive shoes with the right grip to prevent ankle rolling. You should wear multiple layers that you can remove and add as you run. Running uphill can make you feel overly warm but when you rest or descend your body temperature will rapidly decrease. It's recommended to have some waterproof clothing with you, as you may encounter some boggy areas, marshes, or even rain as you ascend the fell. Other items that are required in most fell races include a:

Keep in mind the seasons and weather. The weather can drastically change as you ascend, so it's essential to keep an eye on any descending fog or rain. Hill runners can easily get lost when shrouded in fog, and the rain can make it difficult to see and slippery underfoot.

The seasons also have an impact on your fell running experience. In the summer, the ground will be tough and hard which can result in you rolling an ankle. It's also important to stay hydrated when the weather is warm. In the winter, there are less day light hours so it's essential to begin your run early in the day. Even though you’ll feel warm from running, it's important to wear waterproof layers and warm clothing to prevent your body from getting to cold.

Finally, always tell someone before hand where you are going, the route you are taking, and roughly how long you expect it to take. This way, someone will be able to notify the search and rescue teams if you don’t return straight away.

Where can I go?

Now we’ve got the safety talk out of the way, there are some spectacular routes across the fells in the Lake District. Each one is simply breathtaking and there are new things to find each trip. We’ve found some of the most fantastic fells, ranging in difficulty, and we’ve even found places for you to rest in your motorhome afterwards!

Eskdale is small parish situated in a valley in the Western Lake District. The area features luscious greenery and dwarfing woods. The infamous La’al Ratty of the Ravenglass and Eskdale Railway brings you into the area and it’s a delight all in itself. Deep in the valley you can find Stanley Force, a 60ft high waterfall found at the end of a narrow footpath through a gorge.

The most simple route in this area will take you from the train station up to the falls and back again, in approximately 2.5 miles. Depending on the route you decide to run, there’s the possibility to encounter sweet steppingstones, charming bridges, and wonderous woodlands.

When you’ve explored every nook and cranny, take a drive past the bottom of Lake Windemere and head to Meathop Fell Caravan Club Site. Part of the Caravan and Motorhome Club’s network, this site is located close to the sands where you can relax and take in the views of Morecombe Bay.

Borrowdale is in the heart of the Lake District, and the valley has a range of peaks and caves to explore. Walks and runs around this area can take you to the Bowder Stone, a well-loved tourist attraction that you can clamber up. You can also run along the ‘Jaws of Borrowdale’, an impressive gorge at the centre of the valley. Typical routes in this area are low level, but the beauty of fell running means that you can explore tougher terrains at your own leisure.

Haystacks is a popular hill in the Lake District, situated at the south-eastern end of Buttermere Valley. The summit features its own tarns and stunning views of Buttermere from the peak. The rugged terrain will challenge you, but you feel the ultimate sense of freedom whilst roaming the twists and turns of this ancient terrain.

The Dockray Meadow Caravan Club Site is a short drive away. This site is also included as part of the Caravan and Motorhome Club’s network, and even allows BBQs on site so you can tuck into a tasty, protein filled meal after your run.

Gowbarrow Fell is located close to the north of Ullswater. The rugged terrain features luscious greenery and a variety of wild plants. Airia Beck can be found on one side of the fell, with a magnificent waterfall known as Aira Force. At the summit, you’ll be greeted with dramatic views of Ullswater below, making you feel like you’ve conquered the run.

A short ten-minute drive away is the Troutbeck Head Caravan Club Site in Penrith. This site is perfect for resting after a long run, as it is nestled in a picturesque valley alongside a babbling brook. Again, this caravan park is included in the Caravan and Motorhome Club's network which, when you rent a motorhome with Swift Go, you’ll be given access to so you can take advantage of these exciting offers.

The famous Scafell Pike is England’s highest mountain, and it's the third highest mountain in the UK. The ascent is difficult and the terrain is rough. There are multiple routes to explore up and down the mountain, with loose boulders, mossy grounds, and dramatic scenery. When you reach the top and take in the awe-inspiring landscape, you’ll feel like the king of the world.

Coniston Park Coppice Caravan Club Site is only a short drive away, where you can explore the local village and learn about the area’s heritage at the Ruskin Museum before popping to the pub for a pint to tell your tales of the mountain.

The Old Man of Coniston is a fell found near the village of Coniston and its lake, Coniston Water. The fell is a popular walking and running destination for both tourists and locals. Trample across steep pebbled paths, gullies, and disused quarries. From the summit, you can take in panoramic views across the Lake District. On a clear day, you’ll even be able to see as far as the Blackpool Tower!

Part of the Caravan and Motorhome Club network, Coniston Park Coppice Caravan Club Site is also close to the base of the Old Man of Coniston. The caravan site is set in 63 acres of beautiful National Trust woodland and is only a short walk from Coniston Water, where you can take a dip your toes or enjoy a range of water sports.

Rent your motorhome from one of Swift Go’s multiple depots and set off on the run of a lifetime. Our vehicles come with added Wi-Fi, so you’ll be able to share all of your summit snaps and encourage others to have a go with Swift Go. We’re eager to hear about your adventures on your return!